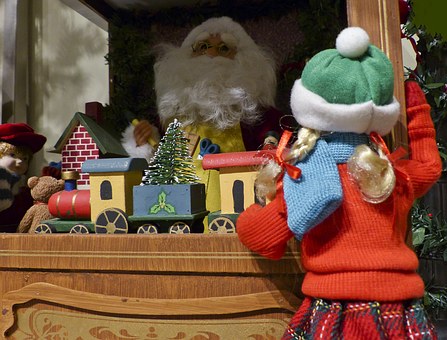 This week I will be sharing a Christmas story with you in six parts. It is an excerpt from my book, REMEMBERING WHEATFIELD BRIDGE, soon to be available for Kindle and also in print. Feel free to share the story with others here on Facebook as it enfolds each day. You may also visit my website jonivannest.com for more information, and be sure to like my Facebook page – jonivannestauthor. Have a Merry and Blessed Christmas!

A wooden sign inscribed Village Toy Shoppe hung above the doorway and swayed with the wind. Alexis stood in front of the shop and took a deep breath trying to work up the confidence to go in. She felt a chill go up and down her spine and the cardboard crate in her hand grew heavy with her indecision. It was now or never. “Well God, this is it. It’s in Your hands now.” She pushed the door open and walked through.

A plump woman wearing glasses with half lenses was dusting a display of brightly colored racecars on the shelf behind the counter. Her gray hair led Alexis to believe she might be someone’s grandmother, which she thought could prove to be helpful. The woman stopped dusting and welcomed her customer. “Good afternoon. Can I help you find a toy for someone?”

The friendly greeting did little to calm Alexis’s nerves. She stuttered as she introduced herself and passed the woman her business card. “Hi, m-m-y name is Alexis Hunter. I am a toy designer.”

“Well then, you’ve come to the right place. How can I help you?”

“Actually, I was hoping I could help you.” That little spin on words was enough to give Alexis the boost she needed. Her well-rehearsed pitch began to flow, the words taking on a life of their own, much like her dolls. “I would like to show you some of my creations. I call them Alexis’s Critter Comforts. They’re a line of stuffed animals meant for pre-school age children. Each one is individually hand-crafted and no two are exactly alike.”

“Is that what you have there?” The shopkeeper pointed at the container in Alexis’s hand. “It looks sort of like an animal crate of some kind.”

“Um.” Alexis hesitated for just a moment. “It is. I couldn’t just stuff them in a bag or a box without air holes. It wouldn’t be right.” She felt the need to explain further. “This seems more humane.”

“I see.” The woman’s drawn out words and raised eyebrow told Alexis she may have gone a bit too far with her last comment, no matter how true she believed it to be. Thankfully, the woman seemed curious. “Well, let’s see what, or rather who you have in there, shall we?”

Alexis opened the crate and pulled out several of her friends, placing them on the counter. The likes of Monkey Mike, Ted Bear, Poofie Poodle and Lisa Lamb stared up at the owner. In a wave of anthropomorphism, Alexis could almost hear them pleading with the shopkeeper, Please let us stay.

The merchant’s words gave her hope.

“Oh, look at this one.” The woman seemed to take an interest in her newest creation, Bonita Bunny. “Isn’t that precious. And so soft, too.” She picked up the rabbit and turned it over inspecting it on all sides. “Why it’s wearing a housecoat. How original.”

“She’s dressed for bed, like a little girl would be.”

“You really are very talented, but I’m so sorry I just don’t have the room to offer them on consignment or otherwise.”

Alexis’s heart dropped. She cast her gaze to the ground in defeat and thanked the woman for her time, then quickly packed up her menagerie and left.

As she walked out the door, she nearly ran into a young woman who was opening the door next to the shop’s entrance, not three feet away. It appeared to lead to a staircase, perhaps to an apartment on the second floor. Tagging behind the woman, yet holding tightly to her mother’s hand was a little girl about four or five years old. The toddler turned her head toward the crate where tufts of lavender colored fur protruded from the air holes. The girl’s eyes lingered on the toy-filled box in wonder as her mother gently pulled her inside and out of view.

Alexis sat in her car and wept for a dashed dream, allowing the tears to wash away her disappointment until she was ready to drive again.

Although the Village Toy Shoppe owner went about her business taking care of customers—both big and small—the rest of the day, she found herself repeatedly distracted by the thought of the little rabbit wearing a housecoat. It reminded her of her own childhood. As a little girl she, too, had a housecoat just like the one the rabbit was wearing that her mother had made. The memories took her back those many years. She remembered the comforting feel of the soft robe around her on chilly winter mornings, of her mother calling her to a breakfast of warm cereal or pancakes. She didn’t realize until now how that simple robe provided a measure of wellbeing that as a child she didn’t even know she had.

Well, it is getting near Christmas. Soon the toys will be flying off the shelf. And that bunny was so adorable.

She picked up the receiver and dialed. “Hello, Alexis? This is Caroline calling from Village Toy Shoppe and I was wondering…”